This one is important to me. Once the printing of buildings is perfected I want to knock down my house and print one with a tower and a secret passage. 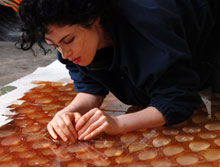 Model maker: Neri Oxman works on â€œCartesian Wax: Prototype for a Responsive Skin,â€ a model that is now part of the permanent collection at the Museum of Modern Art in New York. Credit: Mikey Siegel

Neri Oxman, an architect and a professor at MIT’s Media Lab, intends to print buildings insteadâ€”essentially using concrete, polymers, and other materials in the place of ink. Oxman is developing a new way of designing buildings to take advantage of the flexibility that printing can provide. If she’s successful, her approach could lead to designs that are impossible with today’s construction methods.

Contour Crafting and Catepillar corporation have been working on printing buildings without using forms for the concrete. Oxman’s work would take this another step, adding the ability to vary the properties of the concrete, and eventually work with multiple materials.

D-Shape is a european effort at printing buildings

Oxman is working to extend the capabilities of these machinesâ€”making it possible to change the elasticity of a polymer or the porosity of concrete as it’s printed, for exampleâ€”and mounting print heads on flexible robot arms that have greater freedom of movement than current printers.

She’s also drawing inspiration from nature to develop new design strategies that take advantage of these capabilities. For example, the density of wood in a palm tree trunk varies, depending on the load it must support. The densest wood is on the outside, where bending stress is the greatest, while the center is porous and weighs less. Oxman estimates that making concrete columns this wayâ€”with low-density porous concrete in the centerâ€”could reduce the amount of concrete needed by more than 10 percent, a significant savings on the scale of a construction project.

Oxman is developing software to realize her design strategy. She inputs data about physical stresses on a structure, as well as design constraints such as size, overall shape, and the need to let in light into certain areas of a building. Based on this information, the software applies algorithms to specify how the material properties need to change throughout a structure. Then she prints out small models based on these specifications.

The early results of her work are so beautiful and intriguing that they’ve been featured at the Museum of Modern Art in New York and the Museum of Science in Boston. One example, which she calls Beast, is a chair whose design is based on the shape of a human body (her own) and the predicted distribution of pressure on the chair. The resulting 3-D model features a complex network of cells and branching structures that are soft where needed to relieve pressure and stiff where needed for support.

The work is at an early stage, but the new approach to construction and design suggests many new possibilities. A load-bearing wall could be printed in elaborate patterns that correspond to the stresses it will experience from the load it supports from wind or earthquakes, for instance.

The pattern could also account for the need to allow light into a building. Some areas would have strong, dense concrete, but in areas of low stress, the concrete could be extremely porous and light, serving only as a barrier to the elements while saving material and reducing the weight of the structure. In these non-load bearing areas, it could also be possible to print concrete that’s so porous that light can penetrate, or to mix the concrete gradually with transparent materials. Such designs could save energy by increasing the amount of daylight inside a building and reducing the need for artificial lighting. Eventually, it may be possible to print efficient insulation and ventilation at the same time. The structure can be complex, since it costs no more to print elaborate patterns than simple ones.

Other researchers are developing technology to print walls and other large structures. Behrokh Khoshnevis, a professor of industrial and systems engineering and civil and environmental engineering at the University of Southern California, has built a system that can deposit concrete walls without the need for forms to contain the concrete. Oxman’s work would take this another step, adding the ability to vary the properties of the concrete, and eventually work with multiple materials.

The first applications of Oxman’s approach will likely to be on a relatively small scale, in consumer products and medical devices. She’s used her principles to design and print wrist braces for carpal tunnel syndrome. They’re customized based on the pain that a particular patient experiences. The approach could also improve the performance of prosthetics.

If you liked this article, please give it a quick review on ycombinator or StumbleUpon. Thanks

This entry was posted in Uncategorized. Bookmark the permalink.