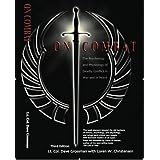 I recently read the book “On Combat” by Dave Grossman and Loren W. Christensen. I read it because, as a writer of fantasy and science fiction, I wanted to understand combat better. I was not prepared for just how much interesting information I would receive.

First, there are a lot of interesting perceptual distortions that occur in combat. Auditory exclusion (soldiers/police often say that their weapons make little sound), tunnel vision, slowed time, loss of near vision.

Second, there is the impact of training. People do not “rise to the occasion” in combat, but “sink to the level of their training.” People will behave as they trained when under stress, and if they always picked up their shell casings immediately after firing on the range they may do that same thing in the middle of combat.

Third, he presents the overwhelming evidence that violent video games and TV cause violence in children. In particular there are rather strong reasons to blame the various school shootings to the influence of entertainment.

Fourth, he talks about the need for everyone to be prepared for a violent attack. We all prepare for fire, even though it is unlikely to happen, but we are afraid to prepare for a deadly force encounter despite the fact that it is more likely than a household fire. I have been thinking about getting a dog as a pet, now I’m thinking about a dog that is big enough to defend the family. It’s not that I think we’ll be attacked at some point, I don’t. However, I don’t expect to need my accidental death insurance either.

Fifth, it has made me want to say “Thank you for your service” to the police and military that put their lives on the line to defend others. Reading this book has helped me to better appreciate the fact that warriors stand on the border between civilization and chaos, and that without them we’d be lost. So I say again, if their are warriors out there, thank you.

If you are a writer and intend to treat the issue of combat or soldiering, you owe it to yourself to read this book.

This entry was posted in book reviews, writing. Bookmark the permalink.